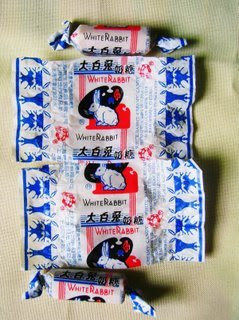 The sweet White Rabbit, which the Philippines Government had banned due to reports that they contains cancer-causing formaldehyde, is on sale in Sabah too. Popularly known as `gula susu', it is being sold in school canteens. I checked this out this morning, almost all Kedai Runcit in Inanam Town (just six miles from Kota Kinabalu) are selling this sweet. Confirmation from parents, school's canteens, too, are selling this brand.As I had mentioned in my posting yesterday, formalhedyde is commonly used to preserve dead bodies.This issue had been raised several months back. Consumers are waiting what the Consumers Association for Sabah and Federal Territory of Labuan Cash) president Datuk Patrick Sindu has to say about this matter.